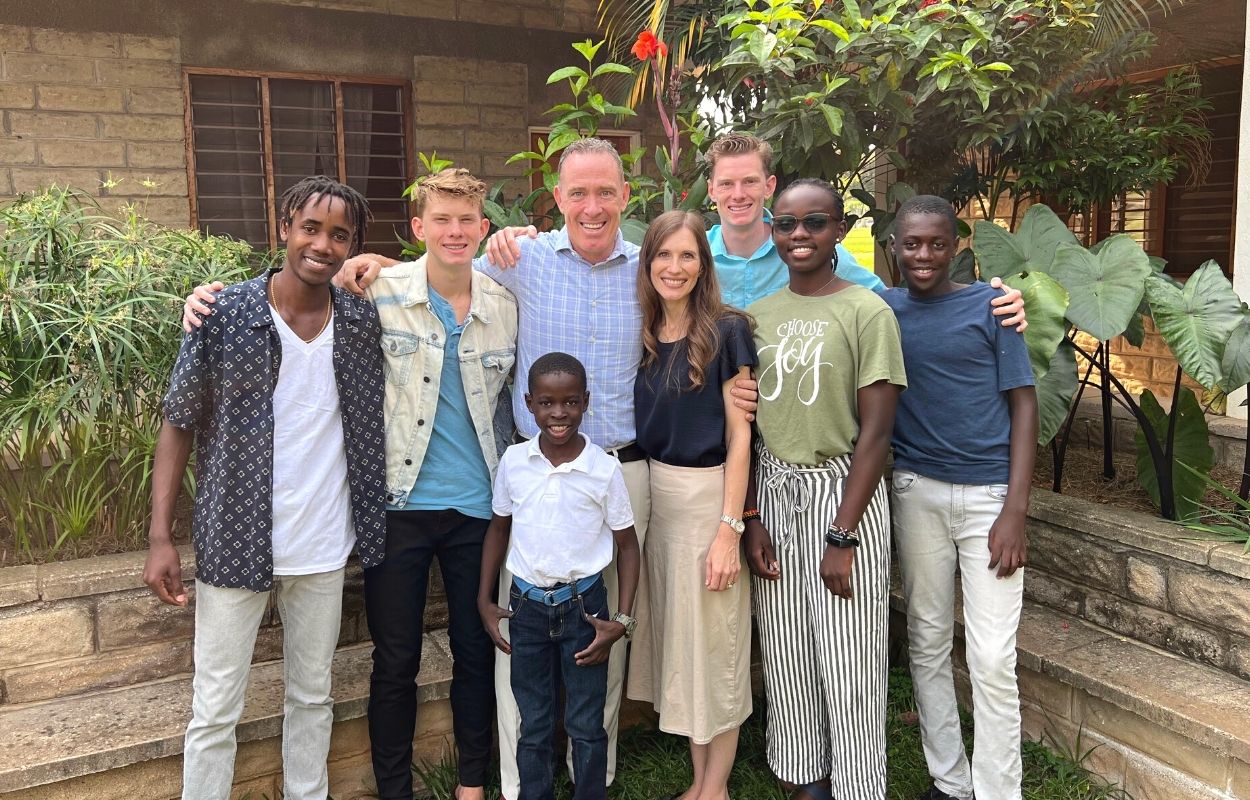 If you’ve been around Shannon for any length of time you will hear him remind others to “live for heaven.” This isn’t just a phrase he says but is something he and his family live out on a daily basis. After marrying his college sweetheart, Danielle, Shannon built a successful international business with clients like Aflac and Hallmark Canada. In 2002 Shannon established SOS Ministries. Four years later, he left the corporate world and moved to Uganda to serve the Ugandan people on a full-time basis. Shannon would tell you he’s just a normal guy who finds great joy in serving His King. He’s a proud dad who loves sports and competition, and is the coach of the Kubamitwe United soccer team.

Danielle is Mom to not only their 8 children, but is also to the 25+ other young people who live in their home. She manages the important day-to-day details, keeping everyone healthy and happy while Shannon is busy and often traveling with ministry responsibilities. Danielle is also involved in bible studies and women’s ministry in the village—she is an accomplished writer of discipleship materials. With a B.A. in church music, Danielle loves piano and also writes her own music. The Hurley kids love life in Uganda and are all aspiring soccer champs. They’ve also started their own ministry called “Compassion in Action” and teach kids’ Bible studies. 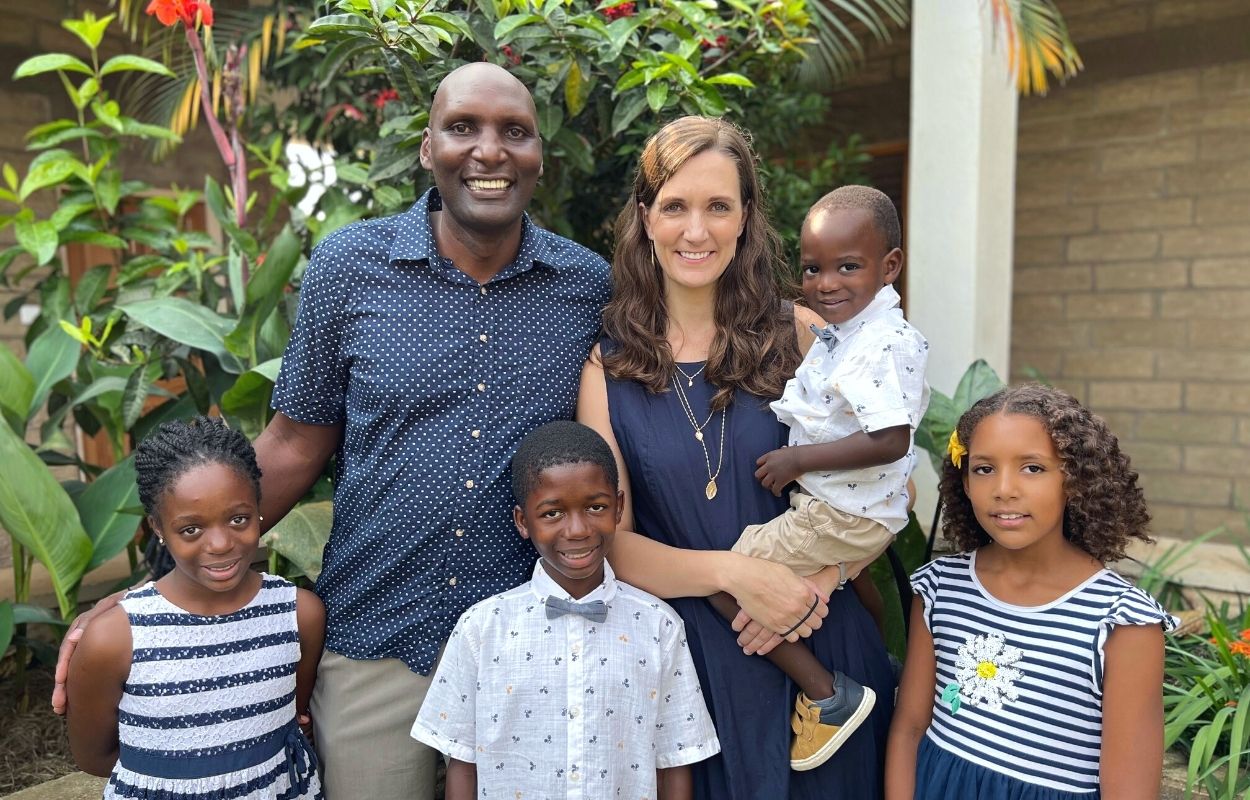 Anthony, a Ugandan and SOS senior-employee since 2007, and his wife Mary have been married since 2012. After spending a couple of years in the U.S., they rejoined SOS Ministries in May of 2016, where Anthony was reacquired as the Manager of the Community Outreach Dept. Since then, he was also designated to manage SOS's 25- member Security Team and the Disability Ministry. Mary, an RN gifted in administrative skills, is a helpful support to Anthony’s work and to SOS as a coordinator of visitors and teams, children’s church director, and manager of her home.

They have four children: Hannah, born in October 2013, arrived in Uganda when she was two and a half. The only things she says she remembers of America are her grandparents, her Auntie Becky, and Costco! Seven months after arriving in Uganda, the Lord provided two other children who needed fostering and a family: Solomon (October 2010) and Ruth Annet (October 2011). Micah was a blessing added in June 2019. They are currently in the process of adopting Solomon, Ruth, and Micah, and hope it will be finalized by the end of 2022. 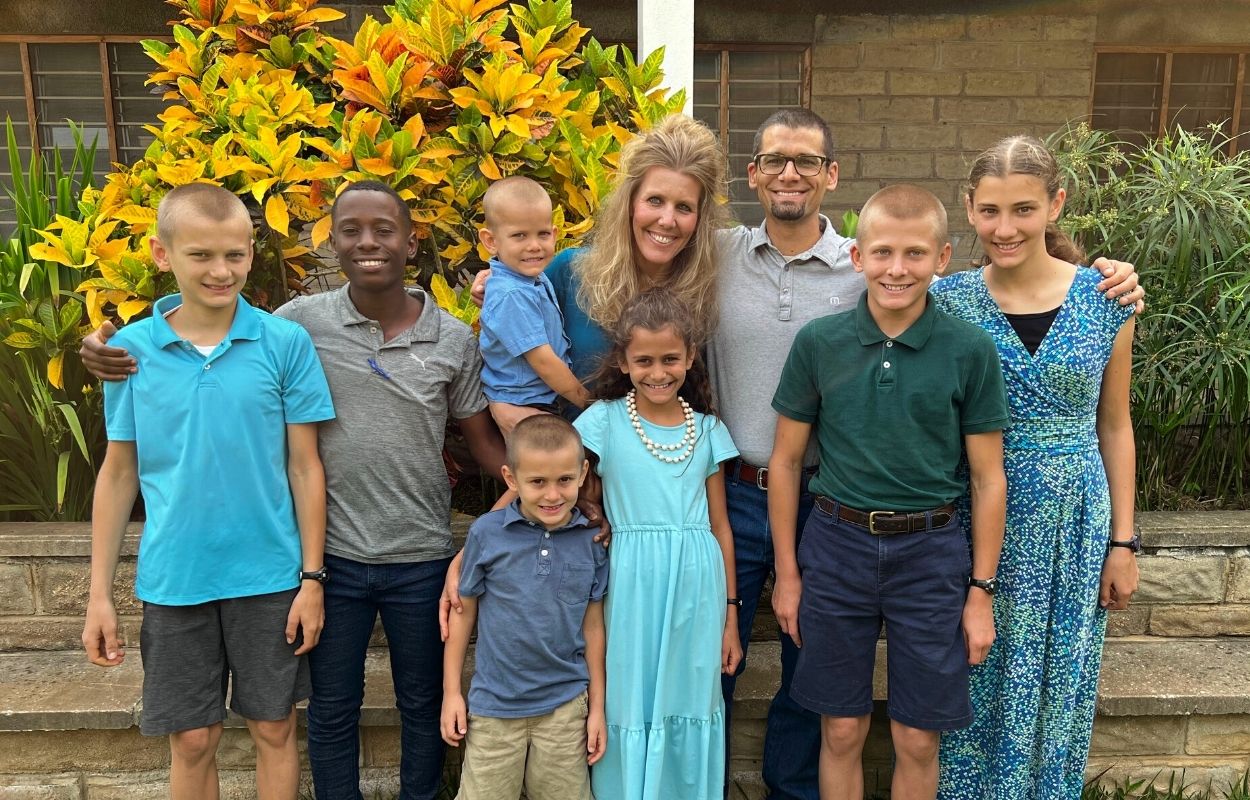 In God’s grace and sovereignty, John Paul and Sarah were raised in families who had God-fearing parents who taught them the gospel. John Paul was trained in Bible and Education at Multnomah Bible College and afterward served as a youth pastor for five years in California. He earned a master’s of Divinity from Phoenix Seminary in 2014. In addition to serving in pastoral ministry for 10 years, he has also worked in construction as a project manager. His wife of 15 years thinks the world of him, and his six children adore him and can’t wait for him to come home every evening! John Paul loves God’s Word and is excited about helping others love it, too. 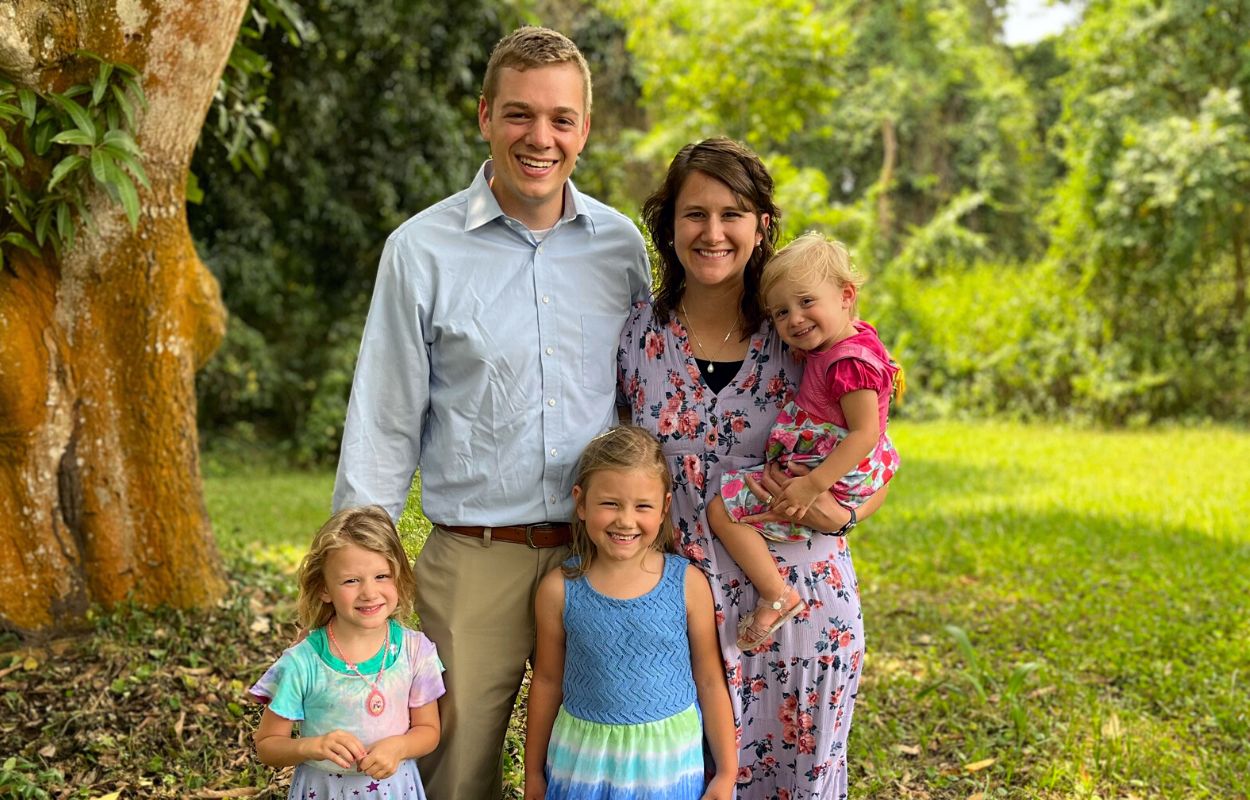 Dexter and Jessi were born and raised in the same small town in South Dakota. Temporarily parting ways for University, Dexter went to Colorado to study Environmental Engineering while Jessi went to Minnesota for a degree in social work. After graduating in 2014, they married and moved to Fort Worth, Texas for an engineering job where Dexter designed municipal water and wastewater systems.

It was also in Fort Worth where God grew their passion for the local church and equipped them for ministry through the loving body of Calvary Bible Church.The Mays are shocked and thrilled that God has called them to serve Him in Uganda. Dexter leads the Development Team at the ministry which is responsible for expanding and maintaining the physical components of the property. These buildings serve as the means which God uses to build his spiritual church. Jessi supports him in his work by caring for their three girls and managing the home.
‍ 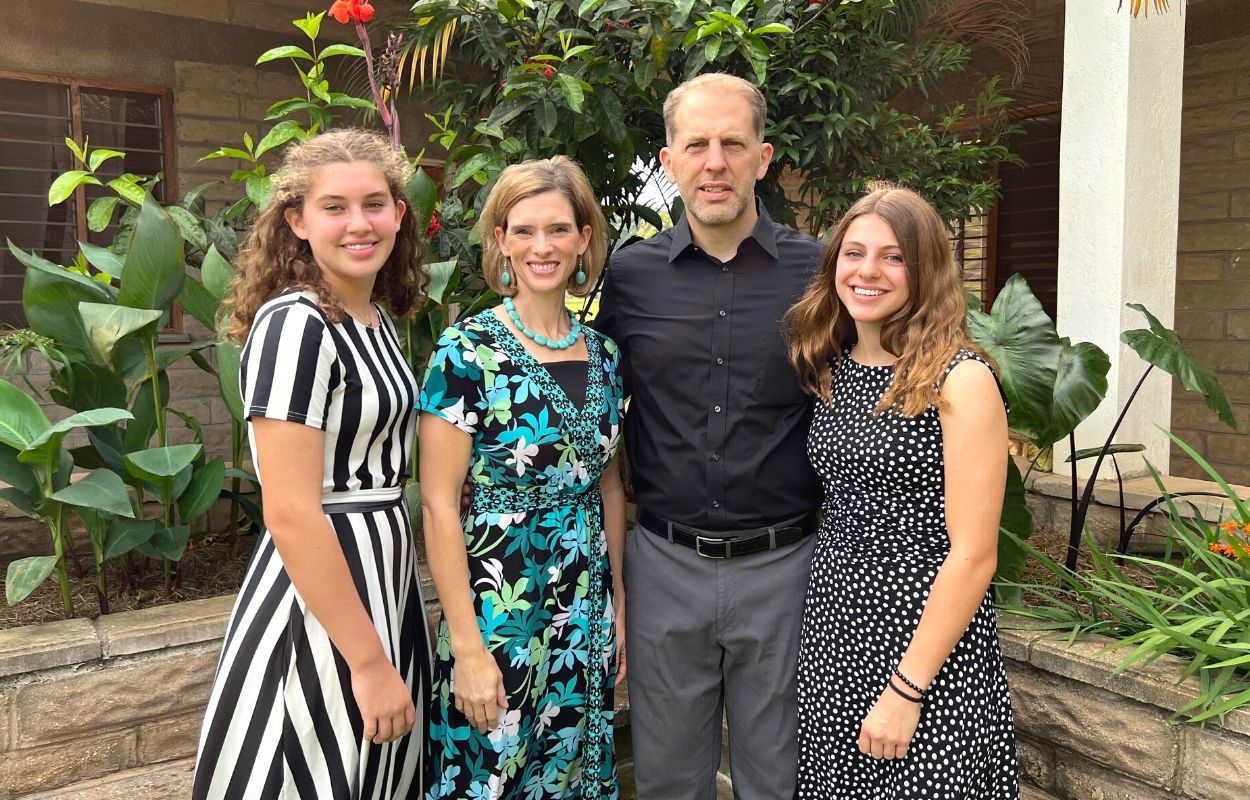 Dan and Angie were reared in Christian homes by God-fearing parents and grew up attending Bible-believing churches in the Midwest. They met in college and were married in May of 2000. In preparation for God’s plan for their life, Dan earned degrees in Pre-Law and Theology (M.A., M.Div., Th.M., D.Ed.Min in Biblical Counseling in progress) and Angie obtained degrees in Church Music and Voice  (M.M).

During their years in graduate school, Dan and Angie began to seriously consider cross-cultural missions and what the Lord might call them to do. In 2002, the Lord provided them the opportunity to spend a year as short-term missionaries in Kenya. During their time in Kenya, they became acutely aware of the challenges and needs of missions around the world and especially in East Africa. Through several short-term missions trips from 2006-2010, the Lord put a burden on their hearts for full-time missions in East Africa.

While still in the US, Dan was able to gain valuable local church experience in a Detroit area church where he served as a pastor and at Inter-City Baptist Church (ICBC), Allen Park, MI where he served in various roles in preparation to leave for Kenya. In 2010 Dan and Angie were sent by ICBC to Kenya, East Africa, where they lived in Nairobi. While serving in Kenya for 12 years, Dan has served in various roles including pastor, church planter, mission director, and the founder and director of a church-based theological school in Nairobi.

At SOS Ministries, Dan has joined the Shepherds Training Center team and helps to equip pastors for the weighty task of shepherding God’s Church in Uganda and throughout East Africa.