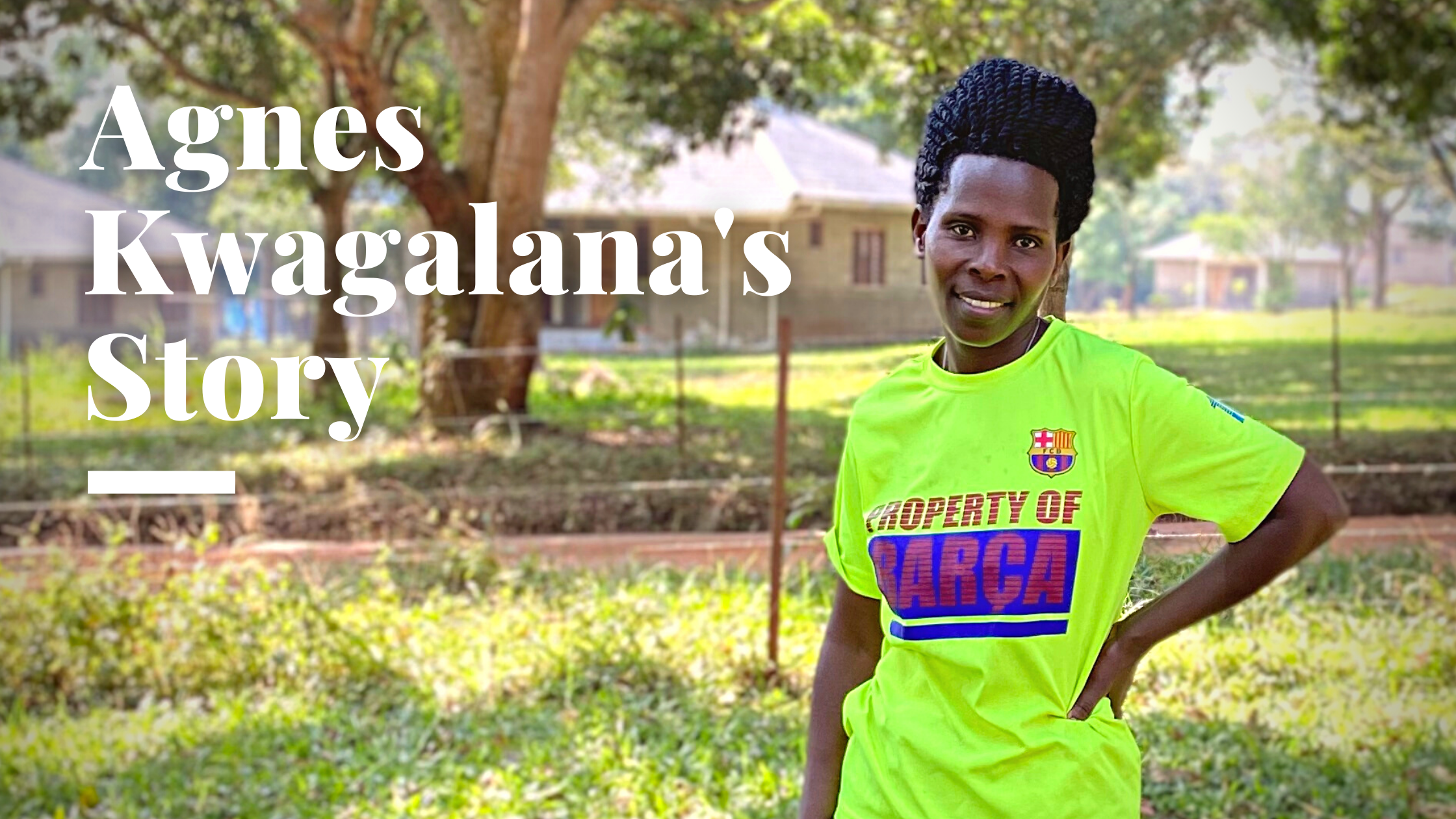 Agnes Kwagalana is our beloved pastor’s wife. She is the Kubamitwe version of the Acts 9:36 Dorcas who “was full of good works and acts of charity”. Agnes nurtures our community and even blesses us with gifts of her handmade clothing! But Agnes didn’t learn her nurturing ways easily, as her mother abandoned her when she was three.
SOS Stories
May 19, 2022

Agnes Kwagalana, a 42-year-old mother of four, is our beloved pastor’s wife. She is the Kubamitwe version of the Acts 9:36 Dorcas who “was full of good works and acts of charity”. Our Agnes nurtures our community and even blesses us with gifts of her handmade clothing! But Agnes didn’t learn her nurturing ways from the example of her mother. Actually, Agnes never knew her mother, since her mother abandoned her when she was three.

She was then raised in Luwero by her polygamous father and stepmothers till she was six, when her father was taken as a soldier, never to be seen again. As a six-year-old, Agnes was taken to her grandmother’s home, where she stayed until her grandfather took the grandchildren to live near the border of Tanzania. Life was challenging with this grandfather who earned his income as a witchdoctor. But Agnes can see God’s hand in her life during this time as she was first exposed to a form of Christianity at a prosperity gospel church in the area.‍

Agnes was intrigued by the idea of Jesus, but her time at this church was short-lived as her grandfather beat the grandchildren for attending church since it reduced his witchcraft business. He eventually sent his grandchildren away from his home and Agnes went back to her grandmother’s home. Shortly thereafter, a Baptist church was planted in her village. The young pastor preached God’s Word in a clear way that exposed the gospel to Agnes for the first time. She felt convicted under the Word and was baptized. The young pastor eventually noticed Agnes as more than a church member and pursued a relationship with her. They were married three years later.‍

Pastor Stanley and Agnes served their church body as they began to grow their young family. In 2009, SOS Ministries moved to the area and began to offer conferences and training for local pastors and their wives. Stanley and Agnes eagerly participated in our trainings and grew in their understanding of the gospel as they were taught The Quest of Truth.

‍Then in 2014, when Stanley was called to join the pastoral team of Community Bible Church of Kubamitwe, the Kwagalana family moved to Kubamitwe. They enrolled their daughters in Legacy Christian Academy and sent their high school sons to school with the Hurley extended family. When Agnes sat under the teaching of CBCK and faithfully attended the women’s Bible studies, she began to see certain sins in her life for the first time.

She noticed growth particularly in her parenting. She started apologizing to her children when she failed them, even though she had never experienced that from her own parental figures. She stopped beating her children in anger, ending the generational cycle of domestic abuse. She praises God for transforming her heart to become controlled, peaceful, and gentle. She also began to delight in serving her family, instead of expecting them to serve her. She is so thankful that she learned to serve, as she puts it, “up to death—for the glory of God!” Her marriage has also been impacted since joining CBCK. She and her husband enjoy ongoing, mutual repentance and yearly evaluation times.

Agnes has especially appreciated fellowship among our women’s ministry leaders. Agnes explains our monthly meetings, “where we read, share, pray, and are encouraged to grow in Christ. Someone can come to share personal things (regarding marriage and parenting) and then I don’t feel alone in my struggles.” Agnes looks forward to these meetings where she feels built up by her sisters in Christ.

Agnes’ favorite way to serve the body of Christ at CBCK is singing on the worship team. She is also learning how to play the piano. In addition to employing her sewing and decorating skills, Agnes serves us all by cooking for church events. Her serving extends beyond our church into our community, where she frequently serves the sick and elderly. And now that she has completed the women’s Bible teacher training, she loves teaching a weekly women’s Bible study. Agnes clearly loves the Lord, His Word, and His people!‍

Agnes is a picture of a thriving church member who is equipped by the church to then serve the church and the community! We praise God for using His Word to empower His servants here in Kubamitwe!