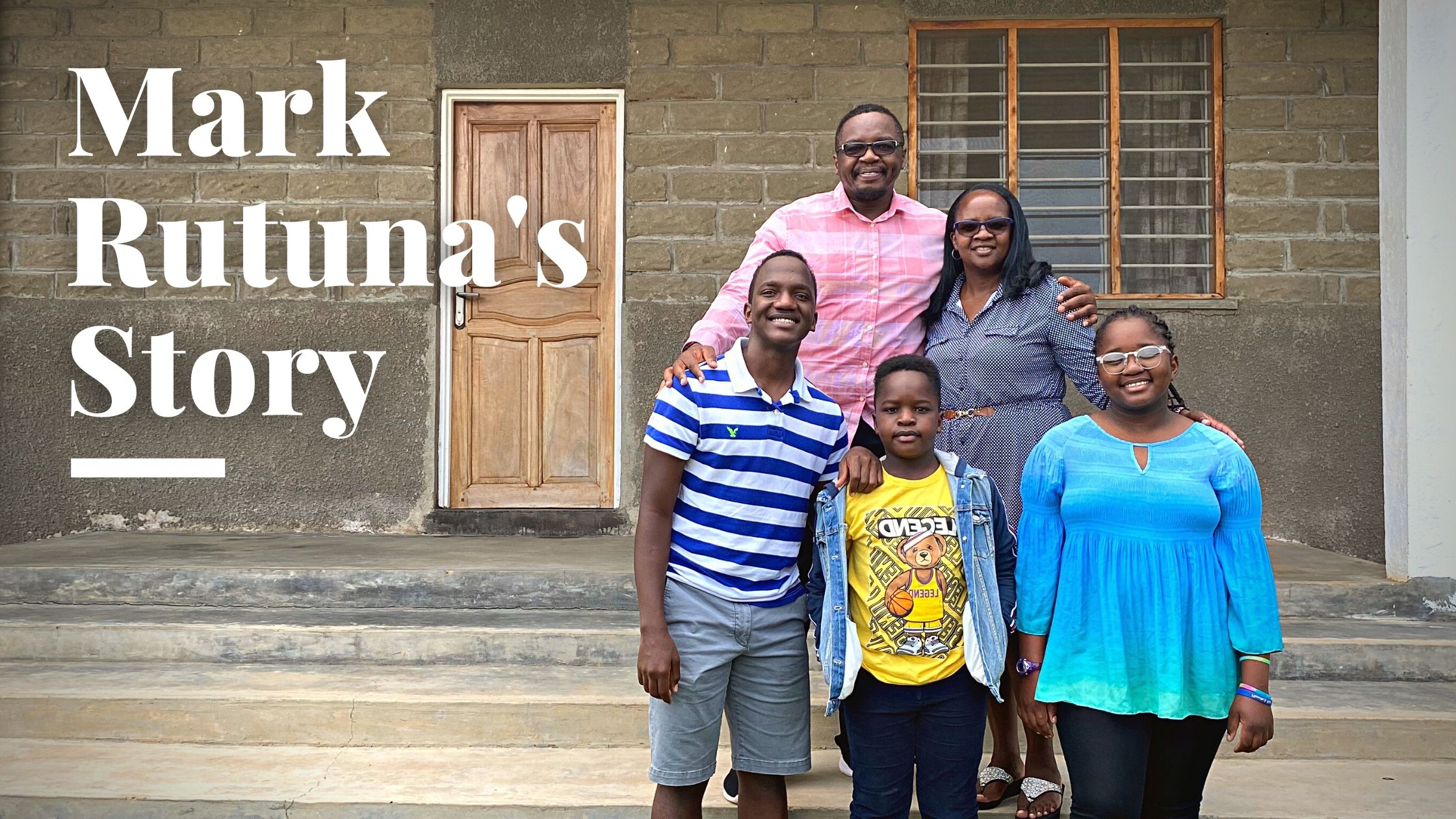 SOS is so grateful for the gift of the Rutuna family! Mark and Margaret and their family have recently returned to SOS after Mark received his MDiv through TMS. If you don't know Mark, or if you never heard his story, be sure to read this blog post!
SOS Stories
May 19, 2022

Three and a half years ago, SOS Ministries sent Kenyan pastor, Mark Rutuna and his family to receive theological training at The Master’s Seminary in California. This past July, SOS Ministries welcomed them back home to Uganda. Well, not to their original home…

Mark and his wife, Margaret, were both born in Nairobi, Kenya. He firmly believes that God always had His hand on both of their lives. This is clear as his story begins much earlier than his birth.‍

Mark’s grandfather was born into a Muslim home. At the age of ten, his grandfather (named Stephen and the eponym of Mark’s three children: Stephen, Stephanie, and Stefan) attended a mission-supported Sunday School where he heard the gospel and gave his life to the Lord. He went on to spend fifty years in full-time ministry.

When Mark’s father abandoned his family before he was old enough to know him, Grandfather Stephen stepped in as a father figure to help Mark’s mother raise the four children. Mark was significantly impacted by his grandfather. He remembers how his grandfather would, “constantly talk about the immense power of Christ—how measureless the power of Christ is!” And God used this Muslim-born grandfather to lead him to Christ. As a boy no older than 12, Mark watched the “Jesus” film with his grandfather with a new awareness of the truth of the gospel. Mark was struck by the humility of Christ to subject himself to death on the cross. Mark’s grandfather patiently clarified Mark’s questions and led him to Christ. This began Mark’s spiritual journey:

“One thing I’m grateful for is, as I look back, I can see the Spirit always faithfully bringing me back when I strayed. It confirms the genuineness of the salvation He granted—faithfully chipping off remnants of the old self, seeking to develop Christ-likeness in me. Whenever I had struggles, my grandfather helped and mentored me. ….He would allow me to tag along with him on preaching assignments…  My grandfather played a huge role in my sanctification—through watching his example and character and through conversations.”‍

Both Mark and his wife, Margaret, grew up in the Compassion International sponsorship program, where they first met as children. Margaret’s beauty caught his eye before he entered double digits! They both attended the same church which hosted the Compassion International program and attended the same Bible club every Saturday where they learned Bible lessons and life skills.

But when Margaret attended boarding school for high school, their paths seldom crossed. As a high schooler, Mark enjoyed playing soccer and rugby, participated in student leadership, and studied hard to become a lawyer. He admired an attorney friend of his grandfather who was a successful Christian lawyer. He thought if he could also attain success as a lawyer, he could break out of his family’s lower-middle economic class. He wanted to provide a better standard of living for his mom who had struggled to provide for the family. He was also motivated to provide for his own family one day, vowing to never abandon his wife like his own dad had.  ‍

Mark excelled in school and was accepted to university to study law. Unfortunately, his family couldn’t afford the small fees, forcing Mark to release his lawyer dreams. He recalls, “God was redirecting my steps and had a better plan. So I stayed home and was involved in the local church and hospital ministry.”

God indeed had better plans for Mark. That beautiful girl he had known as a child went on to receive training as a secretary and “happened” to work as a secretary for the church where Mark served. Margaret was first attracted to Mark’s love for the Lord. She was easily able to observe his passion for ministry. Margaret observed his “service to the people, heart for the lost, for the sickly…that to me was deep, and I saw a godly man.” After enjoying six months of friendship, Mark and Margaret exchanged their mutual desires to pursue more than “friendship.” They were married two years later in 2001.

Meanwhile, God continued to grow Mark as he served at the church and as a teacher/ trainer for Child Evangelism Fellowship. Even during the years he had pursued his dream of studying law, he remembers his grandfather noticing God’s call on his life. He planted the seed for full-time ministry by nicknaming Mark, “pastor”. This calling was confirmed as he began to serve in ministry. He jumped at any theological training opportunity that came his way. By 2011 he was able to receive his bachelors degree from Nairobi Baptist Bible College.

The passion the Lord gave Mark as a kid for the Word of God led to his passion for God’s church. And today he explains, “I love the church—seeing it being purified and ready for the return of Christ.” This love for God’s church was a commonality between Mark and Shannon when they met at Shepherds Conference in California in 2017.

Mark recalls, “When I first met him at Shepherds Conference, I thought, this is the guy I need to have come to host a conference to encourage our pastors in Kenya. I wanted to bring back Southern Baptist preachers to sound, biblical teaching. I had no idea we would ever serve together in the same organization.” This began a friendship forged over a mutual passion to see strong churches established in East Africa. Eventually, Shannon invited Mark to be trained at The Master’s Seminary in California in order to be equipped to serve as a professor at SOS’s Shepherds Training Center. ‍

In July, Mark and his family returned from TMS after receiving his Masters in Divinity with honors. He relishes their time at TMS, “The whole training was a blessing. It had a massive impact on me…and the time together as a family was priceless…I trust it will shape our kids.” Mark and Margaret are especially grateful for the Placerita Bible Church family. He says, “I wouldn’t trade our church experience for anything!”

As he looks ahead to serving as Assistant Principle of STC and professor of preaching, Mark wants his students to be able to “accurately communicate the demands and the delights of the gospel”. He wants to ensure that every pastor who comes through his classes will be able to biblically “represent what God says and biblically characterize who God is”.

Mark looks forward to offering biblical service to the Lord as he serves in this exciting capacity. His oldest son Stephen plans to attend The Master’s University in the fall, while his younger two children are enrolled in Legacy Christian Academy, Uganda. SOS is extremely grateful for the gift of the Rutuna family!

Please pray for the Rutuna family as they resettle here in Uganda and seek to make a dynamic impact in the lives of the students and our community!