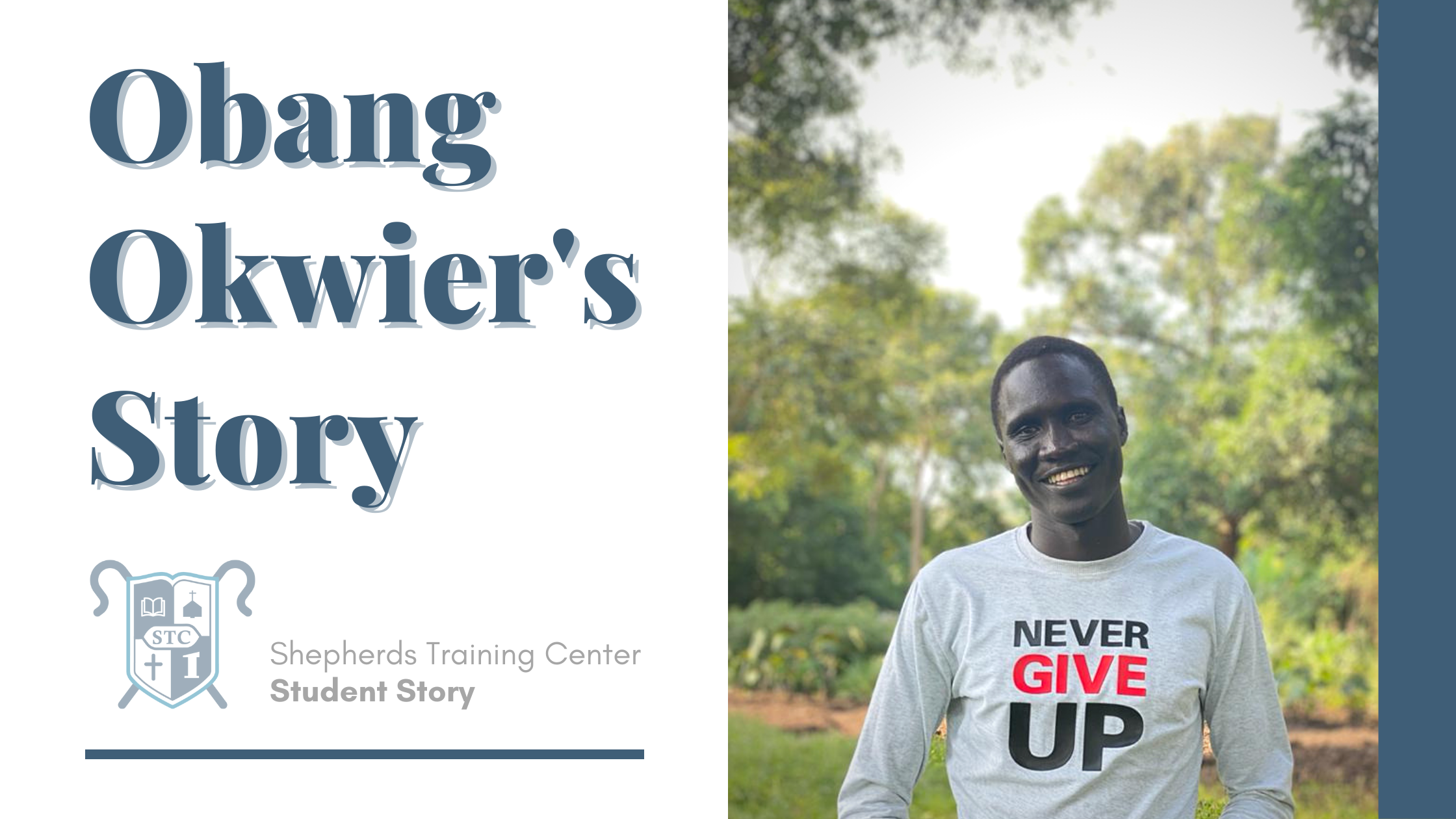 Obang Okwier, a tall Sudanese student with a contagious smile, greets everyone he meets as he walks across STC’s campus. He is known as a friendly guy who loves God’s Word and people. But Obang (pronounced “O-bong”) hasn’t always been known for his joy.
SOS Stories
May 19, 2022

Obang Okwier, a tall Sudanese student with a contagious smile, greets everyone he meets as he walks across STC’s campus. He is known as a friendly guy who loves God’s Word and people. But Obang (pronounced “O-bong”) hasn’t always been known for his joy.

Born in a mud hut in South Sudan to a polygamous family of the Anywaa/Anyuak tribe, none of Obang’s family went to church. Obang lived with his mother and six siblings next to two huts which housed his “stepmothers” and step siblings. His father, a successful cattle rancher, had his own mud hut on the same property. Shortly after he was born, Obang’s entire family moved to Ethiopia to escape war and lived there for seven years. When the family returned to South Sudan, Obang had to drop out of school in third grade so he could work for his dad in the corn fields and on the ranch. Although his childhood was disrupted by war, Obang had the rare advantage of being loved and cared for by two parents.‍

This all drastically changed when his dad was killed by members of a neighboring tribe who ambushed him to steal his cattle. Left without stability or financial support, Obang and his siblings were sent to a refugee camp in Kenya. Obang was grateful for the opportunity to resume his education, but secretly planned to earn enough money to buy a gun to take revenge on the tribe who killed his father. His plan was to shoot and kill the first man he found from that tribe. But one murder wouldn’t have sufficed. Obang remembers, “I thought the revenge would bring me comfort.” But before he could continue with this plan, a friend invited him to the Baptist church in the refugee camp.‍

Unused to attending church, Obang didn’t want to join his friend, but for an inexplicable reason, he came anyway. Obang continued to return to church week after week. He explained, “God was calling me. He made me go, even though I did not like it.” But the teaching eventually changed his perspective. Obang remembers that the teaching on forgiveness was especially convicting. Within a year of attending church, he repented. He stopped drinking alcohol and left his unhelpful friendships. He became active in his new church, joined the choir, and eventually served as a youth leader.

Several years later, the Baptist Convention of South Sudan held a conference in his refugee camp. They held a meeting with the association of eight Baptist churches, asking for the reference for one potential pastor to attend Sufficiency of Scripture Ministries’ pastoral training school, Shepherds Training Center in Uganda. The association recommended Obang. When Obang heard the news, he recalls, “I felt happy. It is not good to lead the church when you don’t have knowledge about the Lord.” Obang eagerly joined the Discipleship Institute at STC in 2019. He was especially impacted by his Doctrine of Man Class. He learned that there was, “some sin that I didn’t even know was a sin, so it touched my heart. For example, a man can love himself. I used to blame others, but I didn’t see myself. I used to do something (wrong) but defended myself. (At STC) I learned humility and considering others as more important than yourself.”

Obang is excited to share his new knowledge with his refugee congregation. He regrets that he used to twist verses when he preached. “But now,” Obang explains, “I’m hearing sound preaching, and learning how to prevent to misinterpret Scripture. Scripture is sufficient. You don’t add and you don’t subtract from Scripture. You don’t use your own knowledge, but use the Bible.”

He explains his desire to return to Kenya. “I want to serve them since they selected me for this opportunity. Then when I finish my training at STC, I plan to plant a church in South Sudan.” Obang hopes to plant a church in the village where he was raised.  His eyes light up as he shares, “Those people don’t know Christ! The reason I want to go there is to help them to know Christ.”