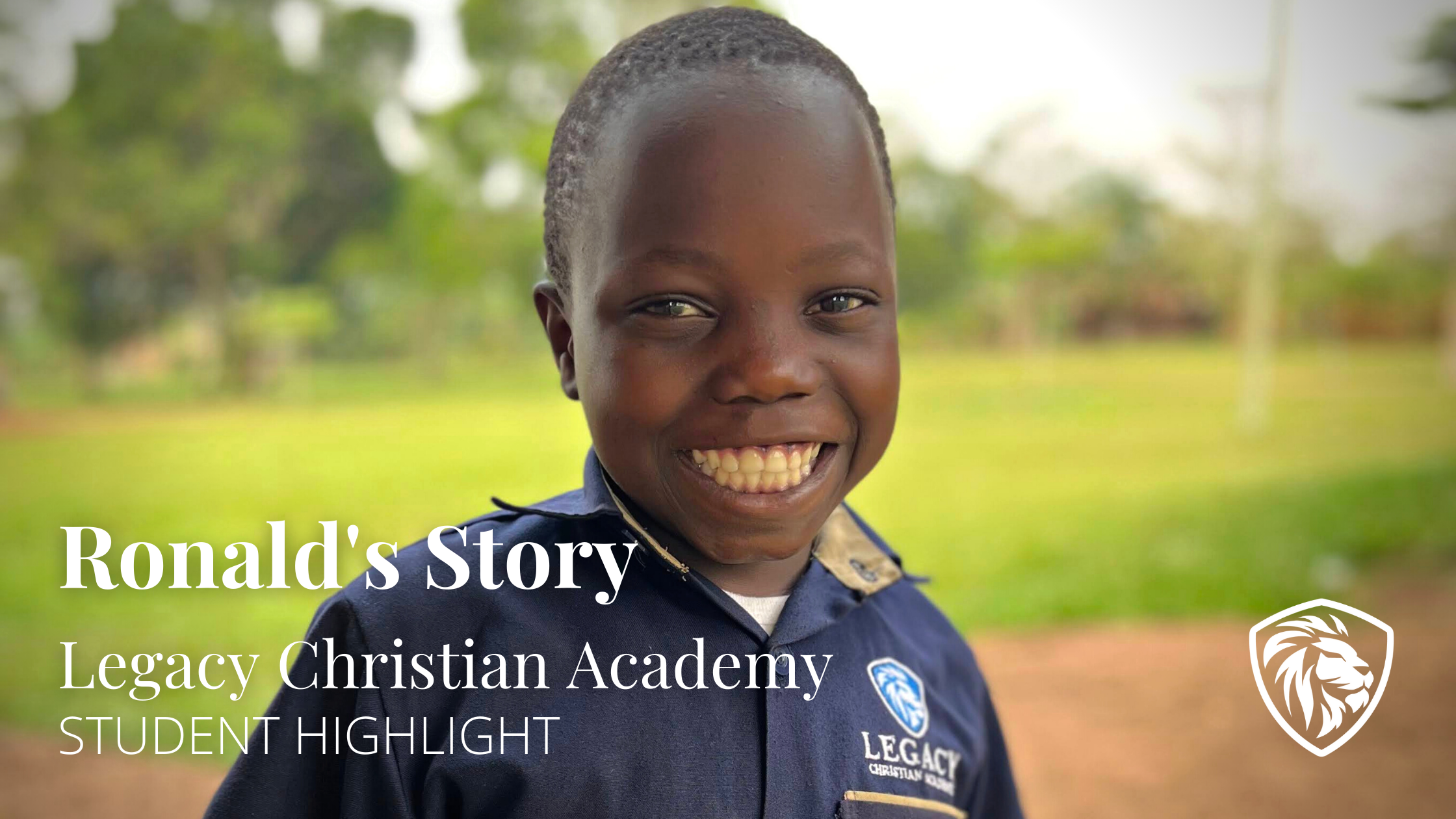 Twelve year-old Ronald Ntege is an easy-going, soccer-loving 5th grader whose favorite subject is science. He seems like a typical Ugandan child living in a rural village. But a recent conversation with Ronald revealed a remarkably mature twelve-year old.
SOS Stories
May 19, 2022

A Walk Through the Bible with a Legacy Christian Academy Student‍

Twelve year-old Ronald Ntege is an easy-going, soccer-loving 5th grader whose favorite subject is science. He seems like a typical Ugandan child living in a rural village. But a recent conversation with Ronald revealed a remarkably mature twelve-year old.

The fifth of nine children, Ronald grows up in a neighboring village of Kubamitwe with 4 of his 8 siblings in a small brick house with an outdoor, uncovered kitchen.

The son of an SOS Ministries staff cook, he was able to begin attending Kindergarten 1 at Legacy Christian Academy at the age of six. His father abandoned the family when he was three years old, but he is fortunate to be treated well by his current stepfather. Ronald typically returns home from school to assist his family with chores such as fetching water, washing dishes, washing his own laundry, and occasionally cooking.

When asked his favorite thing about LCA, Ronald immediately responded, “It teaches about God. I have learned that God loves us and sent his only son to die to save us from our sins.” Ronald believes he gave his life to Christ shortly after entering K1 and hearing God’s Word for the first time. Ronald recalls, “They teached us about the Bible stories and I surrendered my life to Him.”

When asked what his teachers taught him, he began the following unedited narrative of biblical history. You may want to gather your kids around to hear this Bible lesson as Ronald recalls (in his second language, English, that he learned at LCA) what he has learned from his teachers at LCA.

“They taught that God created man in His own image, but Satan decided to deceive man. Then man sinned and God removed him from the Garden of Eden. Then God gave man responsibility that he will get food from his sweats. Then the man gave birth and they multiplied up to the story of Noah. And Noah was a believer, but the other people were not believer, apart from his family. And God told him to build an ark and put every kind of animal, male and female. God said that He is going to destroy the earth. He said, ‘Get in with your family and I will bring rain.’ God brought rain and it rained 40 days and nights. Then God promised Noah that He will not send any flood to destroy his earth and He put a sign of a rainbow that shows forgiveness."

“And then years passed and they reached to Moses. Israel was in the land of Egypt. Pharaoh wanted to kill them all, but a man called Moses was a believer and God told him to go the palace of Pharaoh to tell him to let His people go. God gave him power for the signs, and Pharaoh refused. Moses turned the river that was water to blood. Pharaoh did not allow the people to go. There were ten plagues. The tenth was about killing the firstborn of the Egyptians’ boys."

“Years passed to Jesus. There was a man who got a woman who was pregnant. She beared a son whose name was Jesus. Jesus was to save His people from their sins. Then Jesus grew up teaching about stories. When he grew, it was time for Him to die for the sins on the cross. But He first went on the mountain and prayed and saw Elijah, Moses, and He came down from the mountain and His own disciple betrayed him.  (After betraying him, he hanged himself with a rope.) And Jesus was put to the cross, and they pierced His hands with nails. They removed him from the cross and put Him in the tomb."

“After three days, He resurrected. And He appeared to Mary when she came to the tomb to check if He was still there. And Mary ran and told the disciples and the two disciples came and He also appeared to them. Then they all went in the room and there God appeared to them. There were disciples who doubted Him and He said, ‘Come and touch me—my legs and stomach,’ and they realized he was Jesus."

Clearly, that isn’t all that Ronald knows, but we hope your hearts were encouraged as you experienced the biblical understanding of a student who wouldn’t have otherwise known the Bible had he not attended LCA.

Ronald would like to encourage you with his favorite Bible verse: John 3:16, “For God so loved the world that He gave His only begotten son, that whoever believes in Him will not perish, but have everlasting life.” This is Ronald’s favorite because “when I believe in Jesus I will have eternal life. You only have two options: either you chose to follow Jesus Christ and go to heaven or chose to follow Satan and go to hell.”

‍Will you join us in praying for our LCA students to all come to know Christ as Ronald has? Ronald would especially appreciate prayer to be a good student. He would also covet your prayers for both his biological father and stepfather to surrender their lives to Christ.